I may be forced to take my collected spondooly so far and get a new compy with which to work on. Last time's story-writing was interrupted by an unexpected reboot initiated by my extant machine. This is very scary beans for me. I'm hoping it's a one-off event, but this morning's slowness with literally everything is giving me a concern.

Coles had a major FUBAR in all of its computerised systems today, and a direct result of that is that plns to gather for a birthday party have been moved to the next week. Joy.

CritRole hasn't been on for two weeks, now. The fandom speculates that none other than Sam "Living Embodiment of Chaos" Riegel appearing behind a puppet alien(?) on a show called The Masked Singer. I would not put it past him.

TAZ has been filling that D&D gap, though. Great job, them. And FYI - I have already pre-ordered the Crystal Kingdom graphic novel from Barnes&Noble, thank you for asking.

ADDENDUM - my usual work compy is officially Borked Beyond Usefulness and, rather than fork out $3K for a new iMac of dubious longevity, I have forked out $20 for a copy of iAWriter for the PC and have transferred my workday to a different screen. Whee fun.

Maybe if Apple steps up their reliability, I might wander back their way. I quit off of working on PC's because the irregular BSOD's made them unreliable. Now I'm quitting off of Macs because they're too firkin expensive to replace when they finally die. Around and around we go.

Hope raises for a count higher than four. It's my birthday in three days and there's not a lot of celebration available.

Cake, unsuitable food, and maybe a present. I have purchased a good gift for my Beloved because posting times and advance orders. I ungently hinted about what would be cool for my birthday and expect to be surprised. That, or taken for a shopping trip because that's how Beloved operates.

Four new cases, all linked to previous ones already found. No sign of Patient X as far as I know. Which makes the planned get-together later today potentially "interesting"...

None of us have been anywhere near the infected zones, but there's still Patient X. The unknown, infectious, potentially asymptomatic person who came into contact with the Melbourne Shoplifters, and is now roaming around random places and causing outbreaks in surprise locations.

Calling it now, they're a maskhole Karen for sure.

It's been literal years since Mayhem got his Autism diagnosis [then known as Asperger's, which is now part of ASD yay] and I have since misplaced any paperwork I had regarding his diagnosis. Three guesses what he needs for the employment mob?

The paperwork related to the thing.

So. Today, we are on the hunt for the paperwork necessary to go ahead with whatever the employment mob wants. Fun times.

I have not been writing very fast at all, especially not

School holidays have begun once more and I now have very little structure in my days. Woot? I dunno. Beloved has purchased for me a digital box set of Star Control [I, II, III, and Origins] and I want to know the proper order to play the same before I get going. I may or may not stream it. I dunno.

Mayhem has A Thing in which he shall eventually acquire a paying job, today. Here's hoping it plays through after

I had one of those ideas at 1AM that came to fruition at 3AM and you know that is not going to end well. Details on my Patreon as shenanigans ensue. I've already had one salient question about the nonsense that is about to happen.

I'm going to be having fun. I hope everyone else does too.

Today is Patreon day, and there's at least ONE treat for my Patrons to enjoy. Thanks 1AM. I owe you one praise. You were good

Officials are telling us to act as if we're already sick. The USA is ordering body bags instead of ventilators. Of course the idiots in charge over there are proposing "biggest disaster first" spot-treating the outbreaks.

There's increasing evidence that wearing masks will curb the spread if everyone wears a mask when they go out and they use all the other social distancing protocols.

People who are looking after the sick are dying. Elon Musk bought a bunch of CPAP machines and

I began my day at half-past midnight in expectation of a stream... but Toasty isn't in the right mindset to Art, today. That's cool, though, because I finally got my keister in gear and caught up with the buffer for Inter-Mission. The downside now is that I have to find a rough half-hour in which everyone else is asleep so I can record more stories for more buffer.

I woke up at Arse AM again, and this time, Mayhem wasn't in a mood to chat. Therefore, I'm about 3/4 done with editing Inter-Mission's latest episode now. W00t.

Even after tidying up the reading, I still have to paste in the background music, but that all takes less than a minute from start to stop.

Fingers crossed, I should have all that nonse tied up by this afternoon. Yay.

Fingers crossed, I actually get a favourable reply to the

So. Yesterday's PLN to go seeking publishers/agents went awry. Why? Because yet another instance of site skimming apps cropped up and this time, I had to take action.

Site skimmer apps are more or less little bots that go through other sites' content and present it as their own. Some are little more than cosmetic windows by which users can interface with the site, others... copy without permission.

What they all do is remove traffic from the origin site, so statistics

Okay. Now that I am no longer obsessing about getting last year's Year of Instants out into the world, I can now obsess about selling off Adapting to some lucky soul out there that I can find who might just be interested in this kind of thing.

The usual run of madness be happening today. Money run, house unfuckening, Instant and 500 words in the novel. I have money in the bank again, but I'm still pulling my head in because

Like... I didn't have any freezing. I was able to do other things [though I did move the writing of the Instant to my lappy whilst the main compy did the Disk Doctor thing] and all SEEMS okay.

Acid test #2: Creating and adjusting the Word97 version of 2019's Year of Instants.

All these compy shenanigans have been why I've procrastinated all of that noise. So. I'll do the important stuff

I got sick of the outside temperature and its effect on my bod, so I shaved a metric cat's worth of hair off'a my head.

I mean, serious. This lot of shaved hair could make an entire cat: 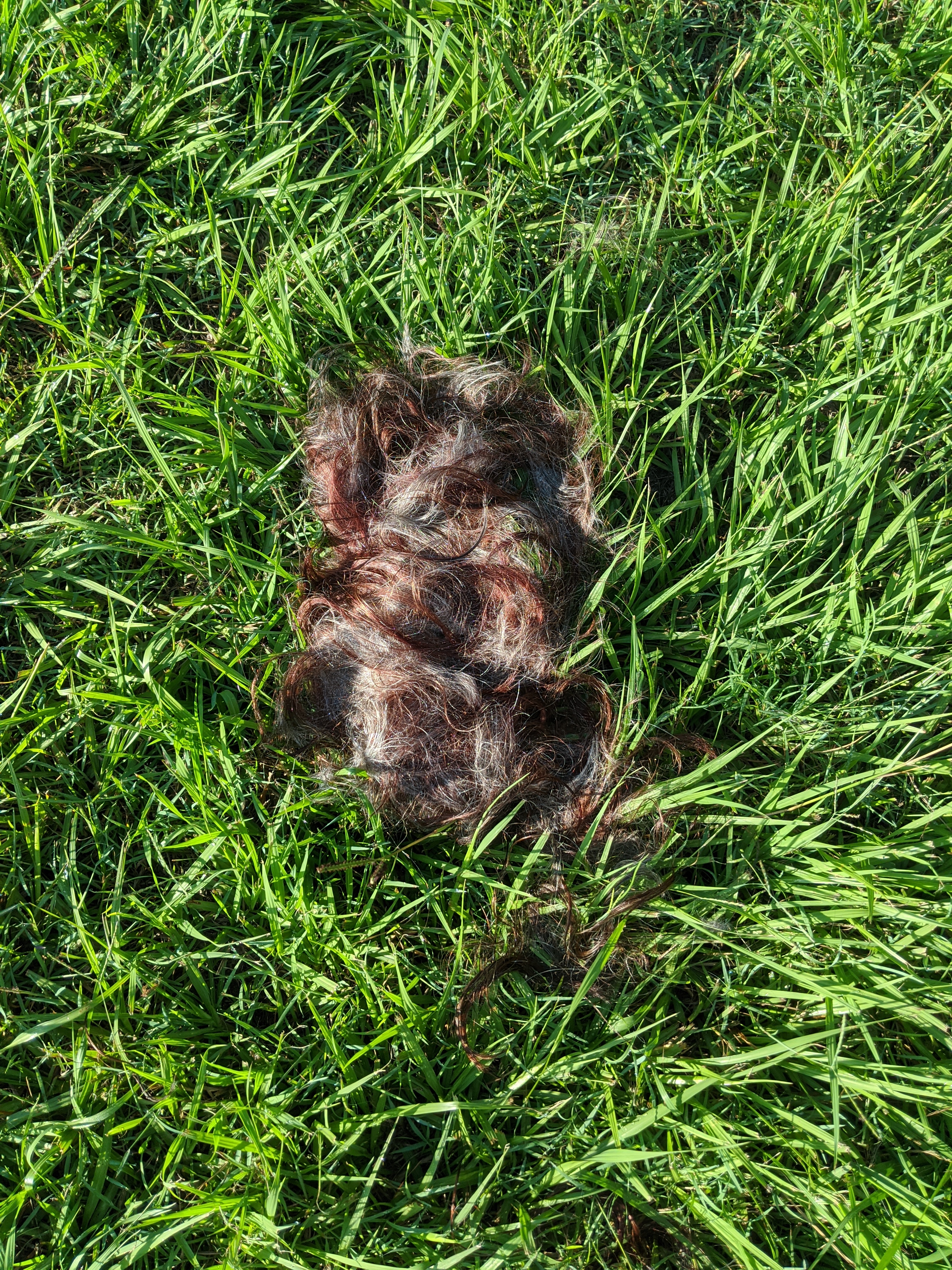 [Shown here: A clump of hair on some grass. There is definitely enough there to make a cat]

Coming soon to an ill-researched cryptid blog near you ;)

Anyway, the time is approaching when I should see Chaos off to school and get some moneys

All the chaos of yesterday meant that, by about one in the afternoon, I was DONE with the day. I also had to wait for Chaos to come home, go out shopping for more vegetables, and start prepping so that all the meat prepared in the morning would have a side to go with when they enter our (tada!) brand new freezer!

The new upright freezer is looking very swish. It has a temperature readout, it has an alert to let you

Today is a long weekend day, because there's nothing Australia loves more than an extra day of sloth. Not for me, though.

Me? I have half a table's worth of vegetables and a whole bunch of meats to cook up into an incredible bunch of pre-prepared meals so that myself and anyone else feeling lazy and not in a cooking mood can just heat and eat some keto-friendly joy.

There happens to be a LOT of fish in our collective inventory, so